Review: Dead to the World by Charlaine Harris (Sookie Stackhouse #4) 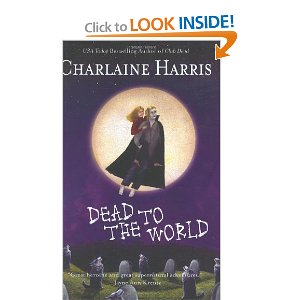 The Southern Vampire series featuring telepath Sookie Stackhouse, a cocktail waitress from Bon Temps, LA, and written by the amazing Charlaine Harris has become my favorite guilty pleasures.  I've been taking my time reading these books, mainly my 'in-between' reads.  I have enjoyed all four I've read but DEAD TO THE WORLD is my favorite by far. Here's a quick rundown on what this installment is about but don't worry, I won't give anythingt away.


After Sookie and a few of her two-natured friends rescue vampire Bill Compton in book 3, CLUB DEAD, she is looking forward to some piece and quiet without any drama. But, as usual, drama is always looking for Sookie. And it finds her on her way home from Merlottes's, the bar where she works, late one night. To her amazement, she runs across Eric, the Sheriff of Area 5, and owner of Fangtasia, a very successful vampire bar in Shreveport. She nearly runs him over with her car and upon stopping, discovers that he is not only buck-naked, but completely without his memory.  He has no idea how he got there, why he is naked and most frightening of all, he doesn't know who he is.

Never before has she felt such compassion for this normally over-confident, arrogant, not to mention very sexy vampire. But she can't help herself. Obviously, someone has put a spell on Eric which has turned him into a vulnerable, even likable vampire and Sookie simply cannot turn her back on him no matter how much she may end up regretting it later.

While Sookie and the other vamps try to figure out who - or what - has done this to Eric, she agrees to let him stay with her at her family home for his own protection. To make matters even worse, her brother Jason, has become missing and no one seems to know where he is. So Sookie, once again has her plate full.  Between worrying about her brother, taking care of Eric while concealing his presence at her house, Sookie is stretched pretty thin. Complicating the situation further is having this helpless, vulnerable version of Eric in her home. She is taken off guard by the innocence and caring nature of this new Eric. She must keep reminding herself that things will surely return to normal once the culprit is exposed and the spell is reversed.


OK, I've already mentioned that this is my favorite book so far and now I'll tell you why.  First and foremost, even though I am a Bill Compton fan, I've always enjoyed the chemistry between Eric and Sookie and Harris has taken it to a whole new level with this latest twist.

Another plus is that with each adventurous installment, we are introduced to more magical creatures. In this book, we encounter witches, faeries and even the deadly werepanthers. But Harris weaves these new characters masterfully with the already established vampires and shapeshifters. It makes for a great landscape of exciting storytelling.

I love that each new book starts within days of the previous books ending. It is like one continuous story and nothing is lost in between. I love the characters, old and new, in this book and the mystery of Jason's disappearance and Eric's spell makes for a very interesting ride. I love the unexpected change in Sookie's relationship with Eric, even though I'm a die-hard Bill Compton fan. I must warn you though - some of the scenes with Eric and Sookie are hot, Hot, HOT!! Charlain Harris has done a fantastic job with DEAD TO THE WORLD and makes me want to dive right into the next book! If you're looking for something different, quick and fun to read, pick up a Sookie Stackhouse mystery and you will not be disappointed! 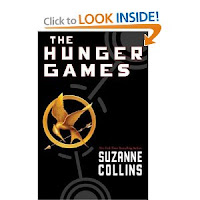 Welcome to Teaser Tuesday, where each week we share a few teaser sentences with other book lovers to get a glimpse into the books being read. Its a great way to add to your TBR list! Here are the rules:

It's that simple!! Now lets move on to my teasers for the week. I'm currently reading THE HUNGER GAMES by Suzanne Collins and I'm taking my teasers from page 84.

Perhaps the girl doesn't even remember me.  But I know she does.  You don't forget the face of the person who was your last hope.


Although this isn't a genre that I read a lot of, I am really enjoying this book. My goal is to get all three in the trilogy read before the movie comes out in March.


To participate in Teaser Tuesday, please visit MizB at Should Be Reading for all the details. Thanks for stopping by and please do visit again!  Happy Reading!
Posted by Lisa (Southern Girl Reads) at 10:17 AM 5 comments: 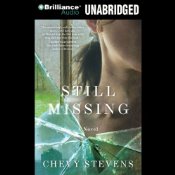 Annie O'Sullivan is a successful Realtor, and at 32 years old, feels she has her life under control for the most part. Her life isn't perfect, but she has a good business with new prospects, a beautiful home and a boyfriend who puts up with her hectic schedule and long hours of work. Her family life is not without it's issues: her relationship with her mother and step-father could be better, but time heals all wounds, right?

And then everything changed in an instant.  Annie was hosting an Open House for one of her listings and after a slow day, one last potential buyer pulled in the driveway.  Annie put on her best smile and greeted him at the door.  His name was David and he had one of her fliers in his hands. But he wasn't there to look at the house.  Before Annie knew what was happening, she had been grabbed, forced into his van and taken away from everything she knew - and no one knew she was missing.

She is groggy, confused and has no idea where she is. How long will it be before her boyfriend realizes she won't be making their dinner plans later that evening? Will he think she's just working late again? What is this man planning to do with her? How long will it take her family to realize she's missing?  And how will she survive?


When I first began listening to this audio, I thought it was going to be a frightening read - one that I wouldn't read at night, but I soon realized it wasn't frightening in that sense, but in a whole other sense. It unfathomable what she endures at the hands of this man she's never seen before, yet he seems to know about her life. The story takes off rather quickly with the abduction and a rhythm falls into place.  Each chapter begins with Annie at her therapist's office after the ordeal is over.  An ordeal that lasted en entire year. So, the question isn't Did she survive? The question becomes How did she survive being held captive for an entire year by a psychopath?

Each chapter begins with Annie opening up about certain aspects of her abduction. In each session, her tone starts out hard, almost flippant, and sarcastic but as she continues talking, her voice becomes softer and wistful, like it belongs to someone else. Like a movie she's watching in her mind. You can hear the changes happen and feel the feeling of utter amazement in her voice that this terrible thing actually happened to her.

Angela Dawe does a great job narrating this tragic story. You can hear the many emotions in her voice as she describes the day to day events of that year and how she struggles to fight her way back to a life she thought would always be there. I liked the way Chevy Stevens alternates the story between the abduction and her life after her release. It is a very effective writing style and makes for good storytelling.

The ending of the story has a shocking twist that I wasn't expecting.  It is a disturbing twist but in this crazy world we live in, it is completely believable, albeit harshly stunning. Overall, I was happy with the book and enjoyed it, though it was tough listening at times.  It is a very well told story that I'm glad I took the time to listen to. 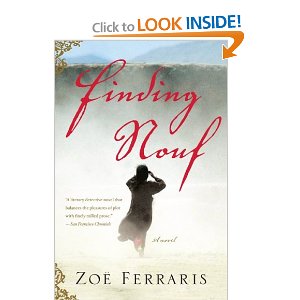 FINDING NOUF is the first in a series written by Zoe Ferraris taking place in Saudi Arabia and centering around the disappearance of Nouf Shrawi, a teenaged daughter of a powerful, wealthy family. Nouf has been reported missing and the family hires Nayir al-Sharqi, a desert guide and friend of the family, to find her. They suspect an abduction but no ransom has been demanded.  Soon after Nayir begins his search, Nouf's body is found in the desert, a victim of an apparent drowning. Though the Medical Examiner closes the case, one of Nouf's brothers, Othman, quietly keeps Nayir on to find out what really happened to his sister.

Upon visiting the ME's office, Nayir encounters Katya Hijazi who works in the women's section.  Katya is one of very few women to have a professional job in their very strict culture.  Nayir, being extremely traditional, has a difficult time dealing with Katya and her involvement with the case.   Not only does she know the family, but she is also engaged to Othman.

With Katya's help in the lab, Naryir begins to uncover clues as to what may have happened to Nouf, but some clues lead to even more difficult and sometimes troubling questions.  Nayir fears the answers may bring him to a terrible truth and jeopardize his friendship with the Shrawi family.


One of the things I like about this book is that it's not your typical mystery novel. I love the Saudi Arabian locale and the culture it brought into the story. While Ms. Ferraris kept the mystery around Nouf's disappearance moving, she also successfully incorporated Nayir's inner conflict regarding his thoughts on women and what was proper behavior. Nayir lives a quiet, solitary life and he longs to know the love of a woman but scolds himself for having what he considers impure thoughts. The more time he spent with Katya working on the case only made Nayir more conflicted. His admiration for her was growing yet he often felt she was crossing a line and it was his responsibility to maintain a proper distance. Especially considering she was engaged to his friend. The two characters worked well together and was a natural fit.

The Muslim culture has always intrigued me so it was only natural that I enjoyed that aspect of the book so much.  That is what makes this such a unique series and one that I will definitely continue reading. The second book in the series, CITY OF VEILS was released by Little, Brown and Company in August of 2010. I'm looking forward to discovering the next case these two unique characters team up to solve.