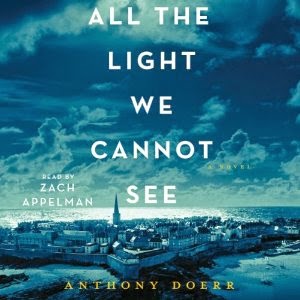 This review contains no spoilers

There is nothing I love more than when a book, or in this case, an audiobook, pulls me in so tightly and quickly, I lose all sense of time and what's going on around me. That is what happened when I began listening to ALL THE LIGHT WE CANNOT SEE by Anthony Doerr.

This compelling, historical fiction novel centering around a blind Parisian girl and an orphaned German boy whose paths would, under normal circumstances, probably never cross, proves that even in life's most challenging phases, it can bring out the best in people, even those from two drastically different worlds.

In early 1940's France, Marie-Laure and her father flee Paris to escape the Nazis and go to Saint-Malo to live with a reclusive uncle until they can return home, where her father works as the lock maker for the Museum of Natural History.  Werner lives in a German orphanage with his sister. After finding a broken transistor radio, and making it work once again,  they listen in secret to a man's voice reading children's stories over the airwaves. They are mesmerized by this and wonder where this man could be. Soon Werner's talents become a knack for working on these radios he is recruited by the German army and sent to Hitler's Youth Camp for further training, leaving his sister behind.

Marie-Laure's father later sets out for Paris alone to return a precious item to the museum that had been entrusted to him for safekeeping.  This mission was so secret not even  his daughter was aware of the valuable item in his possession.  Meanwhile, Marie-Laure and her uncle wait for his return.

Werner proves himself very useful to the German's and is sent on expeditions to scout out anyone resisting the Nazi takeover.  The fact that his passion for and knowledge of these electronic devices were having a direct effect on progress of the war, and ultimately on people's lives, did not escape Werner and, in fact, caused him great conflict.

Over four years passed and with the end of the Occupation in sight, these two young people from opposite worlds found themselves in the same city wanting the same thing: to return to the life they remembered with the people they love.

Though my synopsis does give a good idea of what this book is about, I left so much out purposefully. It is much deeper and absolutely captivated my attention. I was pulled into Marie-Laure's world of blindness, imagining what it must have been like for her in a strange city with relatives she didn't know, waiting for a father she may never see again. Werner was a boy swept up in a war he didn't undertand simply because he was born German and possessed skills other people needed.

Because I loved it so much, it is difficult for me to review I want to do it justice without saying too much. All I will say is  it is a beautifully layered story with sub-plots that give it depth and a lot of feeling. The characters were perfectly developed and authentic to the time, place, and circumstance. It was an easy book to fall into.

Though I'd read where some listeners of this audiobook had trouble keeping up, I didn't have that problem at all. It was all very visual to me, very fluid and completely satisfying. I felt the narrator, Zach Appelman, did a terrific job with his interpretation. I would not hesitate to listen to any of his other performances.

Whether in book form or audio, I would highly recommend this book to readers who really enjoy historical fiction, particularly the Nazi Occupation of France.  About a year or so ago I began seeing more books on this topic and I find myself drawn to their perspectives. ALL THE LIGHT WE CANNOT SEE is definitely worth reading. 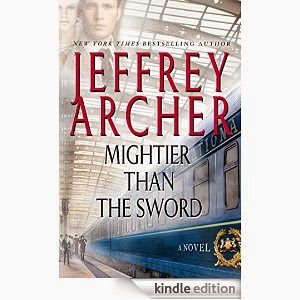 I am very excited to announce the release of Jeffrey Archer's new book, MIGHTIER THAN THE SWORD today, February 24th, by St. Martin's Press!  This is the latest installment in The Clifton Chronicles Series that I have loved since the first book in 2011.  MIGHTIER THAN THE SWORD is the fifth book and continues to centers around Bristol residents Harry Clifton, a successful novelist, his wife, Emma, Chairman of the Board of the family ship-building company, and Harry's best friend and brother-in-law, Giles, a politician.  The series also involves a host of other interesting and pivotal characters that make up the beautifully crafted story lines that keep readers like myself hooked.

What I love most about this series is the range of emotions I experience through the character's trials and tribulations. These books have a little bit of everything: family drama, intrigue, suspense, danger and even a tiny bit of romance. But even more appealing is the unexpected humor weaved throughout. Archer's sharp wit and perfect timing are the icing on top of this literary cake. I recall while reading the fourth book, BE CAREFUL WHAT YOU WISH FOR, that in the middle of reading a chapter full of danger and suspense, I was actually laughing out loud at some of the antics going on. The range of emotions in these stories can only be written by a skilled and seasoned writer such as Jeffrey Archer.  That is a shining example of his international success and popularity.

Regular readers of this blog know that I have been singing the praises of this series since it began in 2011 and you would completely understand why after reading it yourself. Though these books are appealing to so many readers but I suspect the more mature reader would appreciate them even more.

I, myself, am reading this book as I post this blog and I will be sharing my thoughts as soon as I finish. Like the others, this installmanet doesn't waste any time getting to the action. It takes up right where book four left off without skipping a beat. I invite and encourage you to take the time to check out this wonderfully British series and get to know the Clifton and Barrington families. They are a real treat!

I'd like to say a special thanks to Jessica and Brittani at St. Martin's Press for supplying me with my digital copy and so kindly accommodating my late request.


OTHER BOOKS IN THE SERIES
(Click on link for review)

Is it possible we've blown through January already? Amazing how quickly it goes. Today at the Salon, Here's some of the highlights from last month and what happened last week...

The most viewed post I had on the blog last month was The Sunday Salon: Confession Time. I was inspired by Bryan's post at Still Unfinished where he was talking about the pressures of blogging/reading/reviewing. It really hit home with me. In my post I confessed to caving under my own pressures to read certain books to stay relevant. It was a great discussion and reminded me that this blog is my creative outlet and a way for me to connect with other book people all over the world and the enjoyment I get from that is my reward.

The most visited book review, with over 60 views, was LILLIAN ON LIFE by Alison Jean Lester. There's a lot of talk about that book and I'm glad I could help spread the word because its worth the time in reading it.

In the Mailbox . . . I received 2 review books. both from St. Martin's Press. THE LAST GOOD PARADISE by Tatjana Soli with a release date of February 10th.  I don't know much about it, but Amazon describes it as "A black comedy set on an island resort, where guests attempting to flee their troubles realize they can't escape who they are." 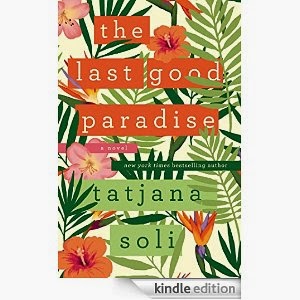 The second ARC I received was MIGHTIER THAN THE SWORD by Jeffrey Archer being published February 24th.  This is the fifth book in his very popular Clifton Chronicles Series.  I've read every book and I am totally excited for this new addition. This series has everything: family drama, political backlash, danger and intrigue - I just love it! Book four, CAREFUL WHAT YOU WISH FOR, had me laughing out loud in places, even though the main plot involved blowing up a new ocean liner filled with guests! Sounds crazy that I found it funny but parts of it really were comical. Supposedly there are going to be only a total of seven books in the series, so we're nearing the end, which makes me sad. But I will then look forward to his new endeavors. But I'm getting ahead of myself! 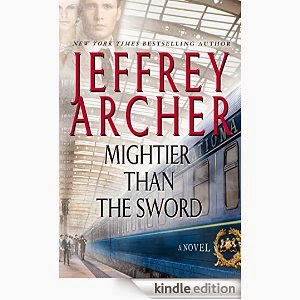 On the iPod . . . I mainly listened to my audio book, ALL THE LIGHT WE CANNOT SEE by Anthony Doerr. I'm a tiny bit past halfway and I am really enjoying the experience. It's 1940's France, with the German Occupation in full swing. I plan to finish it up this week and will have my thoughts later in the week. The one thing I will say at this point is that I understand why so many people loved this book. It has completely sucked me in.

In the Kitchen . . . I stumbled across the most amazing chocolate cake recipe that just happened to be vegan. I am not a vegan. I'm not even a vegetarian. What I am is a legally blind white girl who lives alone, cannot drive, who was seriously crazing something chocolate but had no eggs and a limited pantry. So I did what any other woman craving chocolate would do: I hit the internet! The recipe I found had 7 basic ingredients that any normal person would have and was so quick and easy to make. The other thing I liked about it was, it made one 8x8 pan, which was perfect for just one person. I didn't want to make a huge cake so this was a plus! It was the moistest cake I think I've ever had. There was even a glaze recipe included but I did use butter in it so It was not vegan, but that really didn't matter to me. I drizzled the cake with the glaze and topped it with crushed pecans and a squirt of Ready Whip. It was exactly what I needed to satisfy my chocolate craving and I didn't have to ask someone to take me to the store and spend money on more ingredients!  I found this recipe on a website called Instructables and you can check it out here.

As for today, its all about the Big Game for me. Though I'm hoping to do some raking in the yard early in the day if the wind will cooperate.  Later I'll be making chili cheese nachos to have while I watch the game. I'm not a big fan of either team but I'm less of a Patriots fan so I'll be rooting for the Seahawks.

How about you? Will you be watching the game or just the commercials?
Posted by Lisa (Southern Girl Reads) at 9:48 AM 9 comments: