After taking a brief hiatus from the blog, I am back, once again. I hadn't really planned on being absent for so long, but with the holidays and all that goes with it, time flew by. So, here we are, already in the second month of 2017! Though I haven't been posting, I did do some reading, but I'll get to that in a moment.

Along with the changes happening out in the world this new year, there are also some changes going on in my life as well. As some of you may recall, I made a big move last Spring from Florida to my home state of Ohio. After living in the Sunshine State for over 35 years, it was a big adjustment. Since April of 2016 I've been living in a little town called Amelia, outside of Cincinnati. I have friends living here and it has been nice being around them but I feel like another change is necessary, so this Spring I will be relocating about 90 miles north to Columbus, where my family lives and close to where I grew up as a child. This will be my final move and where I plan to stay. I have my mom's side of the family there along with many friends I grew up with.  Every couple of months. I've been visiting there, but I think it's now time for me to make the move.

So you see, along with the holidays, I've been busy making moving/living arrangements which severely cut into my blogging time. Now that everything for the move has been finalized, (except for the packing! Yikes!) I plan to get caught up on some reviews that I've got stacked up. They will most likely be mini-reviews though. For those aware of my retinal disease, it is still actively progressing, and I have noticed more loss of sight over the last few months, but I am still able to read from my Kindle and I am still listening to and loving my audiobooks.  I plan to continue reading and blogging for as long as I can see the screen. Last month was my 9th year of blogging! I still get enjoyment from it along with a sense of purpose that is very important to me. It helps me to get up every day without feeling like I don't have anything to contribute. Losing my sight is something I deal with every single day but having books to read or listen to and my blog to share my thoughts gives me a boost that you can't imagine. And when I can't see the printed page any longer, I will concentrate soley on audiobooks. But until that time, I am grateful for every single thing I can still see. Actually, reading is the easy part. The hardest thing is the blog. I do okay until Blogger makes changes to to the platform, then I'm lost. I also have a very hard time keeping up with the mouse. It is as big as I can make it but my eyes don't focus together any longer so a lot of times, by the time I find my mouse, I've forgotten what I was doing! Ha! It takes me a lot longer to post things. I will probably have to cut down on the amount of links included because those really eat up my clock. That being said, let's move on...

To get things started off, here is a quick review of an sudiobook I listened to last fall. This one slipped through the cracks and I only recently realized I hadn't written a review. 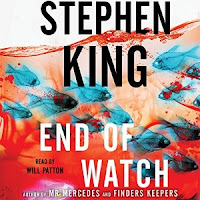 END OF WATCH, as you already know, is the third and final installment in the Detective Bill Hodges trilogy. It began with the explosive MR. MERCEDES, and continued with FINDERS KEEPERS. In this final book, the title pretty much says it all. I'll start by reiterating that I'm not exactly a die-hard King fan like some of my fellow bloggers, but I have read a few. This trilogy was a side-step from his usual horror themed books as it was more crime fiction than horror. I can say that totally for the first two books, but in END OF WATCH, there was much more of the typical King that we've all known. Mind control was a big part of the conclusion of this story.  And for me, I didn't mind it at all. The other two books focused mainly on the crime aspect but near the end of FINDERS KEEPERS, it was evident something else was beginning to take hold. It was a seamless transition and fit the story well.

I loved that all of the characters from the first two books were also present here. Bill Hodges was a great character and his relationships with his fellow crime-busting partners were special and genuine. The story wrapped up nicely, leaving no questions unanswered. Though this was not my favorite book of the series, I enjoyed it just the same. MR. MERCEDES was the best book in my opinion.

As far as the audiobook, the entire trilogy has become one of my favorites of all time. That is due to the extraordinary work of the narrator, Will Patton. He used his voice expertly to bring life to each of these characters, never missing a beat and all being so distinguishingly different. Bravo to him!

I would highly recommend, not only these books, but the audio versions as well. If you have a long trip ahead or are looking for something different to listen to, I suggest giving them a try. They will suck you in and time will fly!