Audio Review: I Can't Make This Up: Life Lessons by Kevin Hart 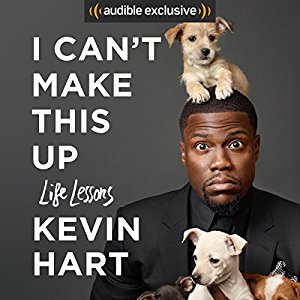 When I choose an audio of an autobiography or memoir I always hope it's narrated by the author. Especially in the case of Kevin Hart's book, I CAN'T MAKE THIS UP: Life Lessons.  My wish came true and knew I had to make time for this audiobook. The book is longer than some autobiographies but that didn't matter to me because the content was so engaging. Having Kevin narrate his own story gave it such a conversational feel. Like he was speaking directly to me. No one knows Kevin Hart better than Kevin Hart and he did a fabulous job of reading his book.

Like the title says, Kevin shares life lessons he has learned that helped make him the successful person he is today. He does it in a way that doesn't come across as preachy. He tells the stories of his life growing up with a very strict and religious mother and while he may not have appreciated her efforts at the time, he is smart enough to look back now and realize how valuable those lessons were and shares them with readers.

Hart is very candid about his relationship with his father, who was not always there for him and his mom and older brother. It became apparent to me that he has a huge capacity for forgiveness when it comes to his father. Though he can't relate to the drug use that controlled his dad, he accepted that that was who he was at that time and learned not to expect too much from him. He could've easily followed that path but with his sheer will and the guiding, sometimes overwhelming rules his mother set for him, he stayed on the straight and narrow path and never did drugs.

What surprised me about the book was how poignant and deep it was espeicially when discussing his parents and later, his kids. You think of Kevin "the funny man" but the vulnerability he showed was so very genuine. I'm not a super fan and I've only seen a few of his movies, but after listening to this audiobook, I am more of a fan than before. I respect his morals and how he doesn't let people influence or compromise what he believes.

Though this book is for all fans/readers, I feel like his target audience is for young, black men who haven't quite figured out their own path yet. He is sincere when interpreting the lessons he's learned and hopes to pass on. This book is a gem for that demographic but again, you don't have to be young and black to enjoy it. He doesn't come across as all-knowing or condescending. He's just Kevin.

If you enjoy autobiographies, you should add this one to your list, especially in the audiobook format. It's easily on my list of favorites.