The Sunday Salon: Tough Week Ahead

I'm having trouble grasping that September is here. I've been seeing commercials about 'Fall' but here in Florida we're a long way off from having cooler weather! This has been one of the toughest summers in my life and hopefully this week will mark the beginning of a much better season.

Getting My Health Back!

In early Summer - June 4th to be exact, I woke up in terrible pain, unable to move my left arm away from my body. I'd been suffering from shoulder soreness for years that would come and go but this was totally different. I was referred to an orthopedist who took an X-ray, told me I had Tendinitis, gave me a shot of cortizone and  sent me home.  Long story short - it didn't work. Fast forward to mid August and 2 MRI's later, I was finally diagnosed with having a 'massive' herniated disc between my C6 and C7 vertebrae. I'm scheduled to have surgery this Thursday to remove the bad disc. Since I've never even been a patient in a hospital before, I'm a little nervous but I'm told it's a fairly common operation and I only have to stay one night in the hospital. I'm so looking forward to the relief it's going to give me! I doubt I'll be posting much in the weeks following, especially the first 3 weeks but I'll be back better than before!

I haven't been able to do much this summer but I have managed to read some really great books. last week I read GO SET A WATCHMAN by Harper Lee. As I read it I liked it but didn't love it, but those last chapters really moved me and I came away really glad I read it. I will say this: I don't agree with all the negative hype this book received when it first came out and all the outrage about Atticus not being the man we thought he was. I didn't look at it that way at all and I wonder if those people really read the book and understood what was being said in the way only Harper Lee could say it. I'll expound more on that when I post my review but for now that's my small opinion.

I also discovered a couple new-to-me authors. I finished HUNTRESS MOON by Alexandra Sokoloff, which is the first book in the paranormal FBI thriller series. It was a quick read that kept my attention while I was living in my reclining chaise unable to move.  I'll be posting my review in the coming weeks. I have the second book, BLOOD MOON and I'll probably read it later this year.

I'm reading a good summer ghost story right now that I'm enjoying so far. It's called BLISS HOUSE and it's by Laura Benedict. I like that it takes place in Virginia and the main character is this old historic house that has terrorized people for generations. I'm only about a third into it but it's a nice change of pace.  I'm hoping to finish it before Thursday.

While I recover from surgery, I'm also going to continue with Karin Slaughter's Will Trent series. I'll be starting Book 4 BROKEN.  Previously I listened to Book 3, but I didn't enjoy the audio as much as reading the actual book.

So that's my plan for the next several weeks. Don't know how often I'll be checking in but I will definitely keep reading and try to visit some of your blogs.

Thanks for stopping by and have a great reading week!
Posted by Lisa (Southern Girl Reads) at 12:33 PM 5 comments: 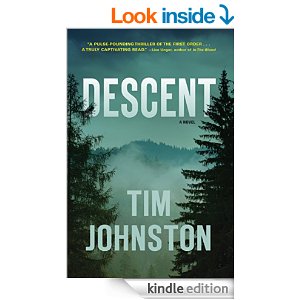 This debut novel by noted writer Tim Johnston made a big splash when it came out in January. I immediately added it to my list of books to read this year. The story involves the Courtland family from Wisconsin.  The parents, Grant and Angela, are working through some troubles in their marriage while their daughter Caitlin prepares to start college in a few months and their younger son, Sean, struggles with being overweight and all of the stigma that goes along with that.

For their family vacation, Caitlin, a competitive runner, chooses the Rocky Mountains of Colorado. so she can condition her body in the rough terrain offered there. Early one morning Caitlin and Sean leave their parents at the motel and set out for the trail. Sean, on a mountain bike and Caitlin on foot, ascend the mountain but decide to veer off of the main trail just a bit.

Back at the motel, Grant and Angela are trying to rekindle their fractured marriage. They receive an urgent call from the local Sheriff explaining that their son has been involved in an accident and is the hospital. When asked about their daughter, Caitlin, the Sheriff is confused and informs them that Sean was found alone and there was no sign of Caitlin.

Tim Johnston doesn't make you wait long for things to start happening in this gripping debut. Right away I had a good grasp on the dynamic of this family so my connection to them came easily. The Courtland family is a likable group although my least favorite family member was Angela. She is not a strong person and when her story was being told through a lot of flashing back to earlier times, it was confusing to me. She not only was dealing with a missing child but still grappling with a tragedy that had happened to her as a teen.

There is a big sub plot revolving around Grant that kept the story moving and helped to develop Grant's character. At first I thought I knew where that story was going to lead but fortunately, it took another turn, totally removing the predictability factor altogether. Needless to say, that was a welcome surprise.

When I chose the audio version of this book, I didn't realize the male narrator was R.C. Bray so when I heard that voice I was really happy. Bray was the unforgettable voice of astronaut Mark Watney in THE MARTIAN, one of my favorite audios ever. This was a much different character and he pulled it off brilliantly. I admit, in the beginning I was afraid I wouldn't be able to get the astronaut out of my subconscious, but that turned out not to be a problem at all. He was Grant Courtland, emotionally tortured and heartbroken father. The female narrator, Xe Sands also did a good job but didn't blow me away. Admittedly, I sometimes have difficulty with female narrators, especially during the vulnerable side of a character, so the reason I didn't enjoy her interpretation as much is probably solely on me.

The bottom line is I found this to be a great debut novel worthy of the buzz it created. It told a tragic story from different perspectives, allowing the reader to fully understand each character. Is is a perfect book? No, but as a debut I think it was really good and I would recommend it. I enjoyed the audio a lot but I can see where the printed version would also be a great experience. This is not a complicated suspense thriller, it's simply a well-told mystery with great characters. Tim Johnston is now on my radar so I'll be anxiously awaiting his next book. And by the way, look at that cover! I love it!

The Goldfinch by Donna Tartt 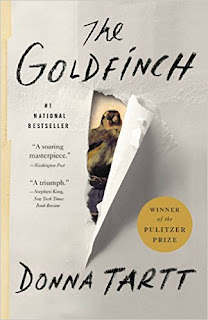 The first thing that comes to mind when I think about THE GOLDFINCH is Why did I wait so long to read this book?! I initially started reading it last year, set it aside (for no good reason) then finally picked it up again in June.  At almost 800 pages, it is a chunkster and my first impression was that it was a bit 'wordy' for lack of a better term, but I knew at some point I would return to it. I just didn't know how incredibly glad I would be once I did finally finish it. Donna Tartt has written one heckl of a book and was awarded the Pulitzer Prize for Fiction in 2014 thus confirming the awesomeness of this book.

The story centers around Theo Decker, a teenage New Yorker living with his mother after his father left them both behind a yar or so earlier. Though Theo has a lot of mixed feelings about his Dad's abandonment, he and his mom are adjusting to the changes fairly well. They are very close and she is the center of his world. Tragedy strikes and Theo is thrown into yet another different world but this time he feels totally alone and not sure what his future will hold. I won't even try to write my own synopsis for this literary treat because I wouldn't do it justice but you can read one from Goodreads here.

I'll start off saying that not everyone will agree with my opinion of this book. Clearly there have been many mixed reviews.  I believe this is one of those books that you either love ot hare for whatever reason. And I hope that if you haven't read it, you will give it a try and see where you land.

Theo's story is a complex, adventure that is heartrendingly sad and chaotic and very well developed.  Now that I've finished the book, I realize that the 'wordiness' of the book that I previously found annoying, was necessary in order to give the reader a full and complete picture of Theo and his life. It made me so very connected to the story - like I was right there as he was living his life. Although there were some parts that were hard to take and I felt they sort of dragged on, it certainly didn't diminish my experience. I know it took Ms. Tartt awhile to write this book and after reading it you can see why. There are so many details that simply couldn't have been left out, in my opinion. No doubt it is a deeply interwoven story that sucked me in further with every single page.

Now to the characters...Ah, the characters!  I found them fascinating and they will remain in my mind for quite some time. Some more than others obviously. They were remarkable - some in a good way and others not so much but they were all memorable.

Boris, Theo's long time friend is one of my two favorite characters, though some who've already read the book may think that is a odd choice considering what kind of person he turned out to be. Personally, I felt dawn to him and even though some of his actions were extremely questionable, I found him endearing and loyal to those he cared for. Boris will stay with me for a long time. My other favorite was Hobie, who obciously loved Theo as a son. I'm purposely not going into any detail about why I loved these two characters so much because I don't want to spoil anything for those who haven't read it. There is a host of other wonderful characters that are so original and they all have a part in making this a wonderful story.

This book is not for the faint of heart.  It is disturbing at times but it is an amazing story that I found totally engrossing. I don't think I've felt this moved or connected to a novel since maybe The Kite Runner. It enveloped me, entertained me, shocked me and awed me. Maybe that sounds a bit much to some but that is how I feel about it. I'm so grateful I finally got off my butt and read it. It was a fantastic reading experience, easily making it my favorite read so far this year.  In a nutshell, this book is the reason I read: To be moved and I certainly was moved.