A Week at the Lake by Wendy Wax 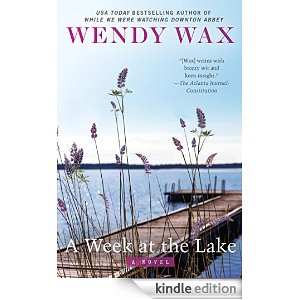 Wendy Wax's latest novel centers around three women who became best friends in their early twenties while living in New York City. Now, Emma, an actress from a well known successful acting family, is a single mother to sixteen year old Zoe. Serena, originally from Charleston, South Carolina, is the star of an popular animated show in which she plays the vivacious and sexy Georgia Goodbody. Mackenzie and her husband, Adam run a theater in a small, family-oriented city in Indiana. For one week every summer the three women would retreat to Emma's family lake house in upstate New York, however the invitations stopped abruptly five years ago without explanation. And now, after five years of no contact, Emma has once again invited them.

The day before they are all to meet in city and make their way together to the lake, Emma is caught in a terrible accident which puts all their plans in a tailspin.  Pushing hurt feelings and all sorts of emotions aside, Mackenzie and Serena, along iwth Emma's daughter Zoe, keep vigil at her bedside. They all have so much to tell each other and it seems that Emma had a reason for bringing them all together. This is a story of old friends, secrets and loyalty with deep emotions and life-long implications.

Believe it or not, this was my first Wendy Wax book. I'm familiar with her other novels since so many of my fellow bloggers have read and praised them. This story appealed to me mainlyt because of the long running friendships the three women share. I can relate to that because most of my own close friendships are decades old as well. That is a special bond so naturally it piqued my interest.

Emma, Serena and Mackenzie were each good characters and likable, though I did feel a little distant from Mackenzie who I thought came actross a bit judgmental.  Serena, on the other hand, was the character I liked the most. I enjoyed her free spirit and playfulness, even though some of her choices were not always what was best for her.

A lot of times when I'm reading women's fiction, I get frustrated by the predictability of the story. so it was a pleasant surprise when the beginning didn't start off the way I imagined it would. The accident caught me off guard and took the story in a direction I wasn't expecting.

Though there was a lot of history between these women that needed to be explained, I felt Ms. Wax kept the story moving without getting bogged down in the details but still painted a clear picture of where each woman had come from and also her present self.  The secondary characters, especially Nadia, the nurse, was a bright spot and I enjoyed her immensely. That was another unexpected element for me.

So, for me, A WEEK AT THE LAKE was win. I can say now that I was prepared for another predictable story of friendship gone awry, but it turned out to be more than I was expecting.  I'm glad I can now say I've read a Wendy Wax novel and  I did enjoy it.  I will definitely read more from her in the future. This is the perfect book to add to your summer reading list. 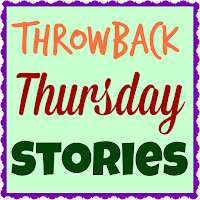 Welcome to another of my Throwback Thursday posts where I'm revisiting my first year of blogging! Looking back, I see that June was a month of firsts.  I hosted my first giveaway and I also started participating in a weekly meme, which I previously had no idea what that was!

I read and reviewed three books in June of 2008, two of which were fiction and one non-fiction. The one that stands out the most to me was A THOUSAND SPLENDID SUNS by Khaled Hosseini. (Click on the title to read my review from 2008). I remember losing myself in that book because I'd loved THE KITE RUNNER so much and I was anxious to get that feeling again. Believe it or not, I've had his latest book, AND THE MOUNTAINS ECHOED for some time now but I haven't yet read it! I honestly don't know what I'm waiting for but I do intend to read it before the end of this year.

BOOKING THROUGH THURSDAY was the weekly meme I began participating in that month. Each week the host would pose a book related question for the participants to answer and discuss on our blogs, then posting a link on the original post.  It was interesting to visit the other blogs and get their perspectives. That meme introduced me to so many new bloggers and I realized how quickly the book blogoshpere was growing.  BTT, as it is also known, became a regular feature on my blog and one that I really looked forward to each week. Happily, BTT is still going strong today. In fact, today's meme titled The Other Side, asks: What do your non-reader friends think about your reading habits? I think it's a great question that is bound to spark up a lot of conversation.

What I remember most about my blogging in June of '08 was how busy I was becoming with it and since I was still working a full-time job as an office manager and bookkeeper for a commercial/residential contractor, sometimes I'd find myself staying up really late to get my posts written or books read. Fortunately though, I was loving it so I didn't mind at all. I was meeting some really great people and my small world was opening up to many new things.

Thanks for taking a minute to step back in time with me to reminisce about my first year of blogging. I'll see you in July! 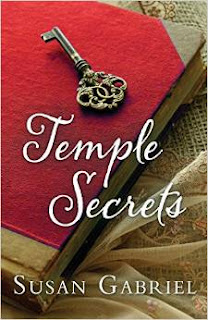 Every family has secrets, but the elite Temple family of Savannah has more than most. To maintain their influence, they've also been documenting the indiscretions of other prestigious southern families, dating as far back as the Civil War. When someone begins leaking these tantalizing tidbits to the newspaper, the entire city of Savannah, Georgia is rocking with secrets. The current keeper of the secrets and matriarch of the Temple clan is Iris, a woman of unpredictable gastrointestinal illnesses and an extra streak of meanness that even the ghosts in the Temple mansion avoid. When Iris unexpectedly dies, the consequences are far flung and significant, not only to her family--who get in line to inherit the historic family mansion--but to Savannah itself. At the heart of the story is Old Sally, an expert in Gullah folk magic, who some suspect cast a voodoo curse on Iris. At 100 years of age, Old Sally keeps a wise eye over the whole boisterous business of secrets and the settling of Iris's estate.  MY THOUGHTS:

This was not my first Susan Gabriel novel.  A few years ago I read and really enjoyed THE SECRET SENSE OF WILDFLOWER, a truly original southern story.  Though I did enjoy TEMPLE SECRETS and getting to know the Temple family members, I wasn't swept away like I'd hoped I would be. I loved the setting of Savannah, the implication of spirits hanging around the old historic Temple home and the deep family history. Gabriel did a great job of making you feel as if you were stepping into the past when entering the home. I did find the characters genuine and most of them likable.  Iris Temple was undoubtedly someone you wouldn't want to cross, therefore most of the other characters tip-toed around her out of fear.

Though there was a lot of talk about the Book of Secrets, I found myself wondering if any of those secrets would be revealed and how they would affect the story. I was expecting big, earth-shattering secrets but very few ever materialized like I imagined they would. Unfortunately for me, the story never developed into the ghostly secret keeper that I wanted it to.

The narration was also performed by Susan Gabriel and though she did a great job reading the story, I would have liked to have heard more of a variety of inflections with the characters.

The bottom line for me is that I liked the charcters and setting but wish the story would have developed further. It's not a long book and I felt that just when it was getting started, it had ended and left me wanting more.

I had such high hopes and had my whole week planned out for this past week. What I would read, listen to and post here on the blog. Well, you know what they say about best laid plans. Instead, I was sidelined with recurring shoulder pain that reached an all-time high early on in the week. I've been to my regular doctor, been referred to an orthopedic doctor and made multiple trips to my chiropractor. I've been taking steroids to help manage the pain, which is debatable whether they are working or not. The pain I've been feeling is originating from my the base of my neck over to the left top part of my shoulder then radiating down my left arm, elbow and to my wrist. This makes using my left arm almost impossible. My chiropractor informed me I had more than one piched nerve. It has been a nightmare I wouldn't wish on anyone. I haven't slept in my bed in five days because I can't lie down properly. I've been averaging about 3-4 hours of sleep on and off each night.

My reading and blogging plans have come to a screeching halt! The steroids I'm taking are giving me blurred vision so I wasn't able to start Wendy Wax's new book A WEEK AT THE LAKE as I planned. Though I have started listening to Stephen King's MR. MERCEDES, I can only handle it in small doses because even the noise of the awesome Will Patton is annoying me. I also have two reviews to write but sitting at the computer has just been too painful. I'm shocked I've been able to sit here this long to write this post. I'm typing so fast, I may not catch all my errors, so please bear with me. I just want to get it done before the pain becomes intolerable.

The fact that I am sitting here typing tells me that maybe I am improving. That's encouraging to me. I will be visiting some blogs today but on my tablet while sitting propped up on the couch. I just may not be able to leave many comments as its harder for me to see on it. I'm hopeful I'll maybe get some reading done today or tomorrow.

What I'm excited about to day is that I picked up a great book deal on Kindle Daily Deals today! It's an author I've never read but this book has great reviews. It's Rachel Abbot's SLEEP TIGHT. I remember when it came out early last year and was happy to be reminded of it this morning. The reviews state that it's a edge of your seat mystery that with an totally unpredictable plot. So I'm really excited to get into that one soon.

Well, this is about all I can handle so I will end this by saying thanks for stopping by and I apologize for being absent on the blog this week. I hope you all enjoy your Sunday! Take care!