Review: The Firebird by Susanna Kearsley 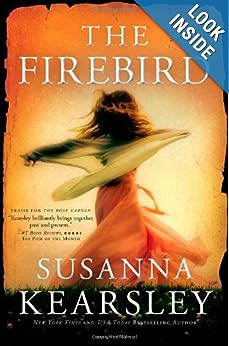 This month's book selection for the She Reads Book Club is probably not one that I would have picked up on my own, but it definitely piqued my curiosity.  THE FIREBIRD by Susanna Kearsley combines ruch historical fiction, romance and paranormal elements similar to mental telepathy or ESP. Here's a bit about the book taken from Goodreads:

Nicola Marter was born with a gift. When she touches an object, she sometimes sees images; glimpses of those who have owned it before. It’s never been a gift she wants, and she keeps it a secret from most people, including her practical boss Sebastian, one of London’s premier dealers in Russian art.But when a woman offers Sebastian a small wooden carving for sale, claiming it belonged to Russia’s first Empress Catherine, it’s a problem. There’s no proof. Sebastian believes that the plain carving — known as “The Firebird” — is worthless. But Nicola’s held it, and she knows the woman is telling the truth, and is in desperate need of the money the sale of the heirloom could bring.Compelled to help, Nicola turns to a man she once left, and still loves: Rob McMorran, whose own psychic gifts are far greater than hers. With Rob to help her “see” the past, she follows a young girl named Anna from Scotland to Belgium and on into Russia. There, in St. Petersburg — the once-glittering capital of Peter the Great’s Russia — Nicola and Rob unearth a tale of love and sacrifice, of courage and redemption…an old story that seems personal and small, perhaps, against the greater backdrops of the Jacobite and Russian courts, but one that will forever change their lives.

I'll start with what I liked about his book. The historical fiction part of the book was fascinating to me, as was the setting. I don't read many books taking place in Russia and Scotland, so I really enjoyed that aspect. I also appreciated the author's note at the end of the book that clarified the true events of Russian history and what parts she embellished for the story. That said, it isn't hard to surmise that I enjoyed those parts of the story much more than I enjoyed Nicola's story in the present with her friend Rob. I found myself whizzing through the parts that didn't include Anna and the quest to find out how she came to possess the wooden Firebird statue.

For me, the main reason for this was I never quite felt a connection to Nicola. In my opinion, there was little character developmen pertaining to Nicolat that explained to me how she first received her 'gift'.  The brief mention of the experimental trials that she participated in where she first met Rob, was very vague and also felt under-developed, aside from explaining her first session including Rob. Since finishing the book, I've noticed that Goodreads has this book listed at 'Slains #2', which, I'm assuming, is part of a series.  If that is the case, it might have changed my view had I read that first book. I did find WINTERS SEA, but it doesn't appear to have any connection to this book aside from the Russian/Scottish history.. That said, I can only go on what I read, so as a stand-alone, it was a bit hollow for me.

Additionally, I was not completely sold on the ESP or psychometry angle of this book and that is probably, again, because I felt thrown into it without any development.  Lastly, the romance between Rob and Nicola was a bit lacking to me. It was bland and uneventful and I was underwhelmed by it completely.

Though I would not have chosen this book on my own, I can appreciate what I've learned of Russian history by reading it. That part I did find fascinating and I was fully engrossed in it, although at times I started to get overwhelmed by it. All in all, it was a pleasant read but not one of my favorites.