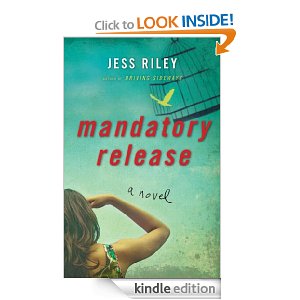 As a fan of Jess Riley's work, I was pleased when MANDATORY RELEASE came out so soon after her December 2012 release of  ALL THE LONELY PEOPLE, that I really enjoyed. I liked her cut-through-the-crap, tell-it-like-it-is characters in that book, so I was anxious to see what she was putting out there this time. Turns out, it was something old that she made new again. MANDATORY RELEASE is actually a novel she started years ago, then scrapped and now its been finished and released.

About the Book (from Goodreads)

Thirty-year-year-old Graham Finch spends his days trying to rehabilitate inmates and his nights trying to rehabilitate his heart - until a new coworker, his high school crush Drew Daniels, walks through the prison gates one hot summer morning.  Drew is on the run from a painful past that's nearly crushed her faith in love. Together, they might just have what it takes to mend their hearts.  If only their way to fining one another were easier than working with convicted felons.

My Thoughts: (No Spoilers Included)

This story is about two people trying to overcome circumstances that they find themselves in and not let it define them. Its told in alternating voices of Graham Finch, in the first person and Drew Daniels, told in the third person. The reader really gets to know where Graham is coming from and how he really feels about his life and the blows he's been dealt. I won't go into detail, but Graham's life is nothing like he'd planned. He finds himself in a completely different situation that could happen to anyone. He tries to maintain a 'normal' life and when Drew re-enters his life he would give anything to have a second chance with her but he's almost too afraid to let himself believe it could happen.

Drew has returned to her hometown to live with her parents in her old room after some devastating event has happened in her life, though we don't learn what that is until much later in the book. Little by little, clues are dropped and the guessing continues about what could have happened that up-ended her life so drastically.

Both Drew and Graham are very likeable characters, albeit a little broken and I quickly found myself rooting for them. This is not a complicated story - its just a story about forgiveness, inner strength and the power of love. What I took away from this book is that though life will sometimes deal you a bad hand, its how you overcome it that defines you, not the other way around. You can't lock yourself in a box and wear protective armor for the rest of your life. You have to put yourself out there or you'll never know what could happen.

The writing in this book is true Jess Riley. Its straightforward, and has just the right amount of dark humor. Its apparent that Drew has a great fondness for her Dad and his love of birds and I liked how Drew talked about that with Graham, knowing she was still learning life's lessons through those things. I also appreciate the title of the book and its many meanings. Its the perfect title. This book comes from a true place, as Ms. Riley used her own personal experiences working in a correctional facility in Wisconsin.as a basis for the book. It was very real and believable, as were the characters. I'm glad that Ms. Riley had the opportunity to go back and finish this book the way she wanted to because I think its a worthwhile read and I'm happy that I took the time to read it.  Oh, and if you hurry, you can pick this gem up for 2.99 at the Kindle Store!

Hello everyone! I took a short hiatus for a month or so but I'm anxious to get back to posting regularly again. I find I like to take a break during the long, hot summer days - it always makes me feel rejuvenated afterwards. I thought I'd ease back into things with a little catch up post.

Another reason I slacked off a bit is I was going through some changes with my eyes and adjusting to a little more loss of vision. Although its a gradual thing, its still jarring to notice the changes. Therefore, I'm becoming more and more dependant on my Paperwhite Kindle and less on actual books. My computer also has some issues so I wasn't able to download any audios for a time but I think I have that figured out. I'm looking forward to September for some great books!

Okay, so its no secret that I loved the Sookie Stackhouse mystery series and I was very disappointed when the series ended earlier this year. I like the quirkiness and well, the just plain fun of those books and I was wondering what I would replace it with. Well, wonder no more! Recently I stumbled across a fairly new series written by Barbra Annino called the Stacy Justice Mysteries. Its a paranormal cozy mystery series that is magical, entertaining, and laugh out loud funny! I'm reading the first book, OPAL FIRE now and I am really liking it. I do believe Stacy is my new Sookie! Not that Sookie can be replaced, mind you! I was very lucky to have gotten the first four books for 1.99 each as a Kindle Daily Deal recently. The last book just came out in July and they are quick reads so it'll be easy to get caught up. 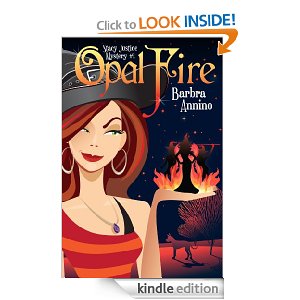 With the film version of THE BOOK THIEF coming out I felt it was high time I finally got around to reading it! I've had the book for years but it kept getting pushed aside. Well, no more! Again, due to my deteriorating vision, I used one of my precious Audible credits and downloaded the audio version. I'm so excited to get started! The narrator, Allan Corduner is going to be AMAZING! Another great audio I'm looking forward to is CITY OF THIEVES that I also just downloaded. This one has been on my TBR list for awhile.

During my little break, I didn't stop reading all together. I did get some books read and I'll have several reviews that I'll be posting in the coming days. I hope you'll stop back by and check them out. I hope everyone has been enjoying their summer and spending time with some great books!
Posted by Lisa (Southern Girl Reads) at 7:48 AM 2 comments: