Review: Then Like the Blind Man: Orbie's Story by Freddie Owens

This debut novel, mainly set in Kentucky, is a coming of age story told by a young boy who recently lost his father, gained a stepfather and lives in a world he struggles to understand or like.

When Orbie's mother, Ruby, remarries after the death of his father in a factory accident in Detroit, everything changed. Victor, the stepfather, has new dreams in Florida so the family heads south. They stop in Kentucky, where Ruby's sharecropper parents live and Orbie is told he is going to stay there while Victor and Ruby go on to Florida to 'get things settled'. They are also taking Orbie's little sister with them. Orbie feels completely abandoned in this strange place and counts the days until they return to get him.

Orbie blames Victor for the changes in their lives and he senses that he is not the man his mother thinks he is. As the days and weeks go by, Orbie reluctantly befriends a physically handicapped black boy named Willis and he even begins to understand the ways of life in this Appalachian town.  But the most amazing discovery is in meeting a black man named Moses, who is Willis' caretaker. Moses is said to be some sort of medicine/healer man with magical powers through snake charming. Through strange dreams and magical events, Orbie welcomes the visions that appear to him and the messages they bring but he must decide what is real and what to believe.

This is a startling debut that tells a riveting story from this boy's perception. Even though Orbie is young, his insights are sharp. He is a bright and loving boy, even in his most stubborn moods. I instantly felt protective of him from the beginning, knowing how deeply he felt the loss of his father. What makes this story so authentic is the perfectly pitched vernacular of the Appalachian people. It may take some readers a few pages to get into the rhythm, but once there, the words flow seamlessly. Freddie Owens painted such a vivid picture of this life with genuine characters, I couldn't help feel as if I was transported back in time.

Though at first I had difficulty relating to the magical elements of the story, I realize it was not the author's fault, but my own. I've read several books containing this element this year and in each case, I resisted the idea at first. I've come to realize that as much as I want to, it takes me longer to appreciate it and accept it into the stories. That said, in the end, I did find it captivating and felt it made this story special. The fact that it wasn't too much or over the top helped.

The mystery surrounding the death of Orbie's father and the business that Victor was embroiled in kept my attention and made me want to keep reading. There was definitely something amiss with him and I like that Orbie wasn't afraid to question it. I also liked how Orbie grew to appreciate and love his grandparents and realized they were very good people.

As a debut novel, I found THEN LIKE THE BLIND MAN to be a big success and I would recommend it, especially to lovers of Southern Fiction, who can also appreciate magical realism. If you are interested, the Kindle version of this novel is available at Amazon for just .99 at this time.

Set in rural North Carolina some fifty years ago, NECESSARY LIES re-opened my eyes to injustices that were being carried out against lower class citizens under the guise of 'the law' during that time. The Eugenics Program, which was in affect from 1929 to 1975, was seldom talked about but frequently utilized in order to control the population in areas where living in poverty was common. Here's more about the book, taken from Amazon's website:


After losing her parents, fifteen-year-old Ivy Hart is left to care for her grandmother, older sister and nephew as tenants on a small tobacco farm.  As she struggles with her grandmother’s aging, her sister’s mental illness and her own epilepsy, she realizes they might need more than she can give.
When Jane Forrester takes a position as Grace County’s newest social worker, she doesn’t realize just how much her help is needed.  She quickly becomes emotionally invested in her clients' lives, causing tension with her boss and her new husband.  But as Jane is drawn in by the Hart women, she begins to discover the secrets of the small farm—secrets much darker than she would have guessed.  Soon, she must decide whether to take drastic action to help them, or risk losing the battle against everything she believes is wrong.
Set in rural Grace County, North Carolina in a time of state-mandated sterilizations and racial tension, Necessary Lies tells the story of these two young women, seemingly worlds apart, but both haunted by tragedy.  Jane and Ivy are thrown together and must ask themselves: how can you know what you believe is right, when everyone is telling you it’s wrong?

Like most people, I'm sure, I hadn't heard the word 'Eugenics' since i was in high school and even then, I probably didn't fully understand what it really meant. Well, this book brought all of its ugliness to the forefront in a way that I will never forget.

Jane Forrester is an unlikely person to tell this story because her life is so drastically different from the people the Eugenics program affected.  She could have very easily turned her back on the people she was assigned to assist while working for the county and just went along with it, but she simply couldn't do it. Even as her brand new picture perfect marriage to a doctor was being threatened, Jane simply could not let it go. For Jane, the secrecy and lies that were told to the victims in order to get them to comply proved to be more than Jane could bear. This story was told in such a vivid, authentic fashion that made it hard to imagine. Not only was the story authentically told, the characters were so genuine, it was like they were plucked right out of a time machine.  Chamberlain focused mainly on two families, which made it easier to form a connection with those characters and get to know them and ultimately the secrets each family harbored.

I got so wrapped up in Jane and Ivy's story, that I'd forgotten the book began as a flashback.  I've read many books lately that went back and forth from past to present and, quite frankly, I'd grown tired of that format, but in this instance, it didn't bother me at all because most of the story was told as if it was happening at that moment. I had been totally transported back in time and was completely absorbed until at the end of the book, I was once again back with Jane's grown daughter many years later.

Though the subject matter was a bit difficult, I thoroughly enjoyed this novel. I think its important to remember even the most unpleasant parts of our country's past in order to remind us how far we've come. Because of a time issue, I chose to listen to the audio version of this book and I was completely satisfied with that decision. Alison Elliot did an incredible job with the narration. The southern vernacular was spot on and the individual characters were unmistakably unique and pitch perfect. Definitely a five star performance.

NECESSARY LIES would be a terrific selection for a book club with the wide range of topics to discuss. I'm sure it would be a very lively conversation. I would highly recommend this book, especially to readers who have an interest in Southern culture.

Guest Reviewer: HER: A Memoir by Christa Parravani 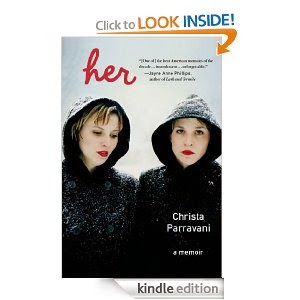 Today's review is from one of my closest friends, also an avid reader, Emerson J. Clauss, III. Emerson loves to read and focuses more on non-fiction books. Today he is sharing his thoughts on a memoir that admittedly was rough to read at times but well worth it.

HER: A Memoir by Christa Parravani

A memoir for sure, but so much more.

At times, a difficult story to read and re-live with Christa, about her and 'Her' identical twin sister, Cara, set around their lives in the Boston area.

As identical twins, they lived so much of their lives as one, which becomes the challenge for Christa after the tragic death of Cara.  This is a tale of life, tragedy, death and the survival of the human spirit over evil, at least for one twin.   It is the story of how our lives are a complex jumble of relationships, decisions and choices; how we meander through what makes up our lives.  Christa shares a view of how much more complicated this is when you are two people, living so close, almost as one being.

Cara's life spirals out of control after a brutal attack and rape; such a violent act and violation from which she never recovers.  This book shares some of the tales of growing up twins, their family life after their mother's divorce from their father; a second marriage that also fails and their unbreakable ties that bind them and keep them so close through all of life.

Christa reveals the inside thoughts and struggles Cara experiences for years after the attack; a failed marriage, drugs, alcohol, and a strange detachment from many of the things that bound them together for years.

HER  chronicles some bizarre actions from Cara, in an immense struggle to stay close to her sister, who is trying to hang onto her own life and also facing challenges.  Christa portrayed this most human life struggle with such clarity, candor and honesty. The story is riveting and her survival is certainly a struggle after Cara's death.  She is ridden with guilt, remorse and the conflicting desire, after several years of difficult times with Cara, of wanting to be by her side, even in death.  And these feelings are almost undeterred.

A great read, even as you are facing the attack, the aftermath, and the ensuing unraveling of so many lives around the twins. This book is hard to put down.  As you read on and hope for survival and redemption, you'll be cheering for Christa's survival.

I heard of Christa and Cara's story on an NPR interview and just had to pick up the book.  I'm glad I did, it was a superb if not sobering story, but offers triumph and hope in the end.