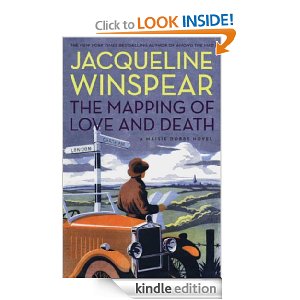 "A map is a conduit for wonder, a tool for adventure.  But it is also an instrument of power - and like all things, power has two faces"


THE MAPPING OF LOVE AND DEATH is the seventh book in the widely popular Maisie Dobbs Mystery Series written by Jacqueline Winspear.  The year is 1932, some 14 years after the end of the  first World War.

The story centers around an American cartographer, Michael Clifton, who left his promising future in America to go to England and join the British Army when the news that England had joined WWI. Although Michael's father had left his homeland of England as a young man, Michael still felt a strong loyalty to the land his father came from. As a gifted cartographer, he knew the importance of good map-making, especially in times of war and he felt his services would certainly be needed and he would not be turned away.  Sadly, Michael never made it home from the war, and like many of the cartographers in his unit, was declared dead and his body missing.

Now, in 1932, Michael's body has been found and his parents have arrived in London from their home in Boston.  At the suggestion of a mutual friend, they are there to ask Maisie for her help in finding some answers regarding the actual cause of Michael's death.

Soon after the Clifton's meet with Maisie they are brutally attacked in their hotel room and left for dead.  Maisie, having just taken the case, is horrified and convinced that it was not a simple robbery.  Nothing from the room was taken, but obviously the intruder was looking for something valuable and when the Clifton's arrived in their suite early, they were attacked and the assailant fled. A few days later, Maisie was attacked and her briefcase taken, leaving Maisie certain of her suspicions.

For Maisie, the Clifton case brings up memories of her own time during the war so she feels a special kinship to Michael and wants desperately to put the elder Clifton's minds to rest. Soon after she starts working, Maisie learns that her dearest friend and mentor, Maurice, is gravely ill.  With the help of her trusted assistant, Billy, Maisie is more determined than ever to solve this case so that she can help the Clifton's and also spend what might be his final days with the man she loves like a father.


Let me first start off by saying that even though this is the 7th book in the series yet the first one I've ever read, I never felt like I was missing anything important in the story. I'm sure thee is alot of back story that I am not aware of, but it didn't keep me from enjoying this book immensely. Jacqueline Winspear weaves a great mystery that develops quickly yet her story-telling doesn't feel forced or predictable as some series' books can, in my opinion. As much as I enjoyed the detective aspect, I equally appreciated the moments when Maisie would reminisce about her earlier days learning from Maurice or her days as a nurse during the war. Those were touching moments and they emphasize the depth of her relationships with her mentor and friend.

I instantly liked Maisie and all the characters in the book. I didn't learn alot about her assistant, Billy, but I got the feeling, there is much more to his story and I will discover what that is when I read the earlier books. There is an interesting lot of friends and business associates of Maisie's that added to the story. One in particular is James Compton and I'm anxious to see where his character leads me.

I found I enjoyed the time period of the book even more than I thought I would. The early 30's was an important time in our world's history and I felt Ms. Winspear's writing was so very accurate for the times. I can see why this series has had such acclaim, it is truly a joy to read. I know without a doubt I will be starting from the beginning and will read the entire series.

I love reading series, especially when I really like the characters because each time I pick up the next book I feel like I'm visiting an old friend. I usually don't start a series in the middle, so this is a rare occurrence for me. But I think it was a great book for me to start with because there were some revelations about certain characters who have been in the other books that I will know even better now. I'm really looking forward to reading the other books in the series and getting to know all the characters. It's a quick read that I would highly recommend.

Look For These Upsoming Reviews: 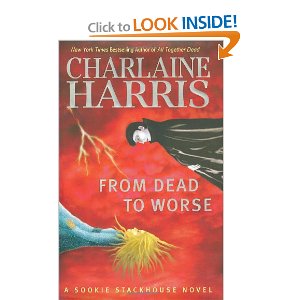 As you know, the Sookie Stackhouse Mystery Series has been around for years and sadly will be coming to an end next year, with the final book being released in May 2013.  This unique, addictive and always entertaining series has been my guilty pleasure for awhile now. I am probably one of the few fans that has chosen to not watch the very popular HBO series, TrueBlood, which was based on the books. I did watch a few episodes but found it conflicting to the characters I have imagined in my mind for so long. I prefer simply to read the books, which in my opinion are always better anyway. I have a pretty vivid imagination and I didn't want to take away from the characters that Charlaine Harris has built up in my mind.

In this 8th installment,  FROM DEAD TO WORSE, Sookie is once again put in danger because of her relationships with the Supernaturals, or Supes, as they are commonly known. Her Weretiger boyfriend, Quinn has been missing for a few weeks and when he does reappear, its apparent he is on opposite sides in a war that  has been brewing.  There is a deadly takeover that completely changes the vampire's Area 5 forever, included the sheriff, Eric Northman, whom Sookie has blood ties to, among other things....

I began reading the hardcover version of this book, but early on I switched to the audio version and I must say, I was pleasantly surprised by how good the narrator, Johanna Parker portrayed each of the characters.  She did a great job distinguishing between the different voices and even her Southern accent was very believable and not over the top like many are.  I'd like to add that I typically listen to audios with my iPod but for some reason my iPod wouldn't cooperate with me, so I sent the download to my Kindle. Wow! I was so impressed by the sound quality that I plan to listen to all my books on my Kindle from now on. What a surprise! Now on to the story...

Although I enjoyed FROM DEAD TO WORSE, I have to admit that it isn't my favorite book in the series. (Book 4 holds that title!!) It took awhile for me to get into it.  Not alot was happening in the beginning pages. But with that being said, one of the most interesting aspects of this book was that we learned much about Sookie's heritage. I mean, we thought we already knew about her family but new light was shed from a most unexpected source. It was enlightening and leaves more than one door open to new possibilities.

What else can I say?  I have so much fun reading these books and reacquainting with the most diverse group of characters I've ever known in books.  Book 12 just came out a few weeks ago and there's only one more after that, so I'm going to savor each one. If you're looking for a fun, quick way to spend some quiet time this summer you should check Sookie out - she certainly leads an interesting life.