W...W...W... Wednesdays is a weekly meme hosted by MizB at Should Be Reading. It allows us to share what books are and have been in our lives recently.Anyone can participate -  just answer these 3 simple questions: 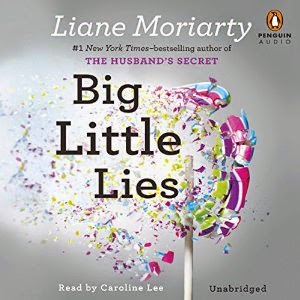 I first discovered Liane Moriarty with the release of her hugely successful THE HUSBAND'S SECRET, almost two years ago.  I really enjoyed that book and felt it deserved all of the accolades it received. Moriarty has an interesting way of telling a story that keeps the reader almost in the loop but not quite fully. I appreciate that in her writing because I don't want to know everything right up front. I enjoy peeling back the layers of the characters and story as I read.

BIG LITTLE LIES centers around the parents of Pirriwee Public School's students, and their connected relationships, both past and present. Right away the reader learns there are definite cliques in this group of parents.  One of the ring-leaders is Madeline, a plain-spoken, opinionated mom who speaks her mind, especially when she's defending her friends. Jane is new to Pirriwee, is quiet and keeps to herself. Madeline and Jane meet each other on the way to their children's first grade orientation and Madeline takes an instant liking to Jane and assigns herself the task of filling her in on the who's who and what's what at Pirriwee Public. Celeste is another of Madeline's friends and her twin boys are also in the class. On the outside, Celeste appears to have it all. She's gorgeous, smart and married to a handsome and very successful Perry. When Celeste walks into a room, everyone takes notice, yet Celeste seems not to even notice.

On the day of the orientation, one of the little girls claims that Jane's son, Ziggy, hurt her and though there was no evidence either way of what actually happened, Ziggy was branded a bully and was shunned by much of the class and Jane was singled out as well.  Though Madeline and Celeste stood by their new friend, tensions rose as the months went by until things came to a tragic head at the annual trivia night that resulted in a shocking death.

Let me say right off that even though the reader is aware that there is a death involved in the story, Moriarty tells the story so that the victim is a mystery until almost the very end.  The book actually opens with police interrogations of the parents who had attended the trivia night fundraiser. In a style we have come to expect from her, the story is built in sections, not giving away all of the details, but leading the reader down her masterful storytelling path until everything builds to its dramatic crescendo near the end of teh book.  By this time, the reader is familiar with all of the characters, their flaws and their secrets. Littered between chapters are excerpts from the police investigation, giving insight to what many of the characters are thinking.

Along with the great storytelling, another great thing about this book is that it is so current and relevant in today's society. There are so many issues touched upon in this story: bullying, domestic abuse, single parenthood, and sexual assault to name a few. There is so much hiding just beneath the surface of these characters yet they appear normal, and in some cases, envied by others. This story serves as a reminder that even the most beautiful, most confident, and even the most successful people may have things going on in their personal lives that would never be suspected.

I chose to listen to this novel and I really enjoyed it. Caroline Lee did an amazing job with the narration and made all of the players seem so real and easy to distinguish between.  I also really enjoyed the Australian dialect and locale of Moriarty's novels. I was fully absorbed into this audio and time flew when I was listening. I was even surprised by the ending of the book because I didn't know who had been killed until Ms. Moriarty wanted me to know. She has mastered the art of surprise even in a book that many of the details are known from the beginning. That is what I like most about her writing.

The bottom line for me is, this is a really good story with dynamic characters and issues that are real and easy to identify with. I've now read two of Moriarty's novels, one on Kindle and now this audio and I can say that I enjoyed both of them immensely.  In my opinion, you can't go wrong either way.