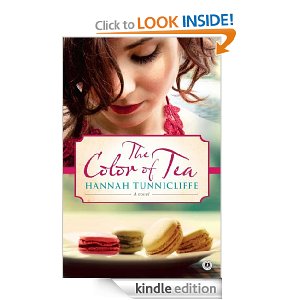 THE COLOR OF TEA is a sneak-up-on-you debut novel by Hannah Tunnicliffe that was released in June. I'm going to come right out and say it - this book was a difficult one for me to review. When invited to the tour and reading the summary, although the premise sounded interesting, I wasn't bowled over but thought to myself  'This will be a nice book.'  It caught my attention mainly because I am a huge tea lover and it piqued my curiosity as to how that aspect was going to fit into the story.

Grace is at the center of this story about a married English woman living on the island of Macau with her Aussie husband.  They desperately wants to have children but all of their attempts have ended in heartbreak.  After one last experiment and subsequent failure, the realization that it is most likely never going to happen hits Grace pretty hard.  She and Pete struggle to accept their family of two without really even talking about it. Knowing how upset Grace is, Peter is reluctant and frankly, unequipped to handle her delicate state. As a distance grows between them, Grace throws all of her time and energy into opening a cafe, not even knowing if she can make it work, but feeling as if she has nothing to lose.

As I mentioned earlier, this book crept up on me. At first, I did have a hard time getting into the rhythm of the story and honestly, it took me until at least half-way through to develop a connection to Grace. It wasn't that I disliked her, I just didn't understand her completely. She was a hard character for me to get to know. Partly, I believe, because of the conversations she has through letters written to her mother, who is obviously absent. Mostly, the letters left me more confused and leery about Grace . Additionally, the letters left me distracted, which made it hard for me to connect to both the story and to Grace. That said, I did appreciate that the letters became a symbol near the end and revealed their purpose. I just didn't love that part of the writing. Once I was able to develop a connection to Grace, I began enjoying her story and getting to know the people who became important to her. Because of my love of tea and baking, I really enjoyed reading how she developed the recipes for the macrons and the daily running of the cafe.That part was very enjoyable to me and in fact, re-ignited my own love of baking. I also liked the locale of Macau.

The supporting characters around Grace were lovely and in my opinion were the heart and soul of this book. If I was to be brutally honest, I would have to say I liked the supporting characters more than that of Grace. Though as I'm writing this, I remind myself that flawed characters are what make books really good, so maybe I'm being too hard on Grace. This is one reason I've had difficulty making up my mind about this book. At first I didn't care for it, then it grew on me, then I really liked it but it had parts that definitely bothered me. But all in all, I would say I enjoyed it more than I didn't. I would encourage you to read it to decide for yourself. It is definitely one that had me all over the place. Please check out these other blog stops to read other reviews of this debut novel.