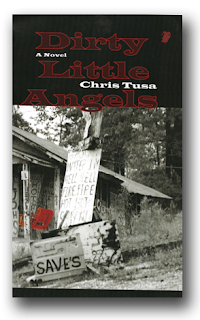 Let me first start by saying that this book is not for everyone. This is not light reading and it's not necessarily what you'd want to take on your family vacation, in my opinion. That said, you'll notice that I gave this poweful novel by Chris Tusa a high rating and there are several reasons. But first, let me tell you a little about the book.
DIRTY LITTLE ANGELS is the edgy, haunting story of Hailey Trosclair, a 16 year old girl living with her parents and older brother, Cyrus, in the slums of New Orleans. The story is told through Hailey's eyes and with her voice. Hailey's family has had nothing but bad luck recently and she is scared that her family is falling apart. All her parents do is fight, so Hailey slips in and out with no one really keeping an eye on her. It's not that her parents don't love her, they're just so caught up in their own problems that they just don't notice Hailey half of the time. She lives in fear that her parents are going to get a divorce. And to make matters worse, the home they are living in is about to be in forceclosure. Hailey is desperate for God to answer her prayers and save her family.
Things only get worse when Cyrus starts hanging out with Moses, a self-proclaimed follower of Christ who has his own ideas of how to interpret the Scriptures. Hailey, having asked God through her prayers over and over to help her family, is vulnerable and easily influenced by this dangerous man.
At 16, Hailey is a bright girl who is trying her best to find answers to some of life's biggest questions, all while trying to survive the day to day in the slums she lives in. There's no doubt the most important thing to her is her family, but Hailey is, after all, still just a kid.
This is one of the grittiest novels I've read in awhile. While reading, I was at times uncomfortable, angry and even horrified. You get thrown into the story on page one and it moves quickly thereafter. I have to say that even though this is fiction, things like what happen in the pages of this bold book are happening right now in real life in our cities. it's not candy coated and filled with fluffy dialogue. It's real, honest contemporary fiction that packs a punch.
Even though my childhood was the polar opposite of Hailey's and I can't relate at all with what she went through, I still felt a connection to her. I didn't want her to give up on her faith and I cringed at so many of the things she did.. Hailey is an incredible character and Chris Tusa did an amazing job of telling her story with dialect that was spot on.
Again, this book isn't for everyone, but I promise it is worth the time in reading it. I'd like to thank Chris Tusa for graciously sending me an ebook of this gem of a novel. Born and raised in New Orleans, he is a writer and poet as well as an English Professor at LSU. This is an author I will most definitely be looking out for in the future.
Chris Tusa website
Read the first chapter here
DIRTY LITTLE ANGELS
Author: Chris Tusa
Publisher: Livingston Press (AL)
Published: March 2009
Pages: 170
Rating: 4.5 Stars out of 5 (Highly Recommend!)
Posted by Lisa (Southern Girl Reads) at 9:00 AM