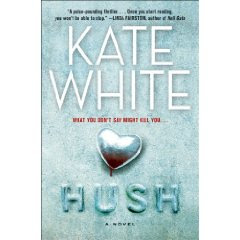 HUSH is the latest from best selling author and Editor in Chief of Cosmo magazine, Kate White. Though she has written several successful books in her Bailey Weggins Series, this is her first stand alone novel and the only one I've read. But I can assure you it won't be the last. Here's a quick synopsis of the story from Harper Collins -
When Lake Warren learns that her husband, Jack, is suing for full custody of their two children four months after their separation, she's pretty certain things can't get any worse. The upside is she's working with the Advanced Fertility Center as a marketing consultant alongside the attractive, flirtatious Dr.Keaton. But the morning after their one-night stand, Lake finds Keaton with his throat slashed and discovers that things can indeed become worse - they can become deadly.
So as to not jeopardize her case for custody, Lake is forced to lie to the police. Having just been intimate with a man who has been murdered, and wanting to protect herself from being charged with the crime, she begins her search for the truth. Meanwhile, the police start looking at her closely, people at the clinic start treating her with hostility, and strange clues begin dropping - quite literally - on her doorstep, and Lake realizes that she is dangerously close to dark secrets, both about Keaton and the clinic. But can Lake finish what she started before it's too late?
I hadn't read a murder mystery in awhile so I was looking forward to cracking this one open. One thing I liked about this book right off the bat was that it jumped right into the story from page one. I didn't have to wait long for things to get rolling. Another thing I liked was having a fertility clinic be in the center of this mystery. This worked for me because it was something different that I haven't seen too much in murder mysteries. Fertility clinics are big business right now and this story brings up issues that women today may be facing when using fertility clinics. I found the story to be suspenseful and believable even though I didn't always agree with the decisions made by Lake Warren, the main character. Speaking of the main character, I did like her immediately and felt she was a strong female character that I began pulling for right away. There was a wide range of supporting characters that gave the story many interesting angles, but not too many that it mucked it up. As the story progressed I found myself changing my mind as to who I thought the killer might be many different times. All in all, the story moved along nicely and I didn't feel like there were any slow spots that dragged for me. I was also pleased with the ending. The title of this book is a small word but in this story, Lake discovers that sometimes keeping quiet is harder than you ever thought.
I would recommend this book to anyone looking for a good suspenseful mystery without all of the blood and guts of some hard core murder mysteries. I enjoyed the story without being afraid to turn the lights out at night. That's the kind of mystery I like.
You can read more reviews of this book here -
HUSH
Author: Kate White
Publisher: HarperCollins
Published: March 2010
Pages: 352
Rating: 4 out of 5
Source: Review Copy provided by AuthorsOnTheWeb
Posted by Lisa (Southern Girl Reads) at 6:00 AM