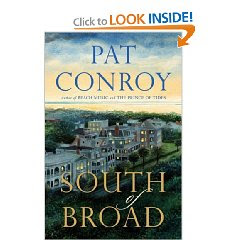 Pat Conroy's much anticipated latest novel begins in 1969 Charleston, South Carolina where we meet the King Family. Leopold Bloom King, the narrator of the story is the son of an extremely structured high school principal mother and a lovable science teacher father. Although from the outside, the Kings look like any average Southern Catholic family, it is quickly revealed that the Kings are not so average. As a teenager, Leo is still dealing with the suicidal death of his older brother, who Leo himself discovered in a bath tub with his wrists slit. Subsequently, Leo spent much of his youth in a mental institution trying to come to grips with the loss. To complicate matters, he was also arrested for a crime he didn't commit, leaving him to endure the punishment handed down to him to prove to his family and the community that he is, indeed, a good person.
In June, 1969, the summer before Leo's senior year of high school, a series of events takes place on a single day that brings Leo together with nine other kids that change the course of all of their lives. We meet Niles and Starla Whitehead, brother and sister who have grown up in one orphanage after another; Betty, an African American orphan; lavishly outgoing, yet mysterious twins Sheba and Trevor Poe, who move across the street from the Kings; Ike Jefferson, the son of the new African American high school football coach; Chad and Fraser, children of the aristocratic Rutledge family; and Chad's equally privileged girlfriend Molly Huger.
In Conroy's poetic, fluid style, we follow along as each of these young people embark on their future, overcoming obstacles and always keeping their loyal friendships in tact. Leo, now the gossip columnist for the News & Courier, is the glue that holds these friends together. So years later, when Sheba Poe, now a famous Hollywood movie star shows up back in Charleston and asks for help in finding her gay brother Trevor in San Fransisco, there is no hesitation on the part of anyone to help. However, no sooner do they begin searching for Trevor, that they realize a menacing presence from the past is following them and watching their every move, making the task of finding Trevor even more dire.
My thoughts -
Over the last few month I've read several books with Charleston as a backdrop, but with SOUTH OF BROAD, Conroy's deep love for this city reached out from the pages and grabbed my heart like no other. His lovely writing was so lyrical I would re-read whole pages. Yes, I admit it - I am a huge Pat Conroy fan.
There were a lot of characters in this story and I worried that it might be a challenge to keep all of them straight in the beginning, but my fears soon vanished. The way they were all introduced into the story was natural and believable and each one was so unique in their personality. One of the most interesting to me was Leo's mother, Dr. Lindsey King. She is such a controlling, strong woman, yet her sarcastic quips in the most intense moments made me laugh out loud. I didn't expect that kind of humor from such a regimented person. Leo's relationship with his mother is complicated yet loving and one of the most important in the story. But of all the characters, Leo was my favorite, partly because he shared that sarcastic, at times dry, humorous side of his mother. But mostly I favored him for his loyal, thoughtful nature. The relationship Leo has with old Mr. Canon, the owner of an antique store where Leo performed his community service as a teenager, is a beautiful example of the kind of person Leo King is. Though the chapters involving Leo and Mr. Canon were few, they were among my favorites.
The story covers a lot of ground and the way Mr. Conroy tells it allows the reader to have several 'Aha!' moments where events and even people come together that make it all click into place. It's subtle yet impacting. In true Conroy form, he incorporates a lot of Southern history and nostalgia into it as well. Remember that when the story begins it's 1969 and desegregation is still new to the South. This plays an important yet not overpowering role in the story as does the AIDS epidemic of the 1980's.
In the latter part of the book, there is a chapter aptly titled 'Guernica'. It is 1989 and a Hurricane named Hugo has set it's sights on Charleston. Conroy takes one of the most frightening and devastating moments in the city's history and describes it with such poetic eloquence that as I was reading I could see it playing out in slow motion in my mind. From the nervous humor as Leo and his friends and family await the storm to the chilling aftermath, it is a beautifully written chapter and its one of my favorites.
I suppose its plain to see that I loved SOUTH OF BROAD. Though I'm not saying its a perfect novel, in my opinion, it is one that ranks pretty high with me. Be sure to check out the other tour dates for more reviews and opinions. You can find the complete list of tour hosts and dates here. I'd like to thank TLC Book Tours for allowing me to be a part of this tour. I knew I was going to read this book, but they made it happen a lot quicker and I'm grateful for that! To visit Pat Conroy's website click here.
SOUTH OF BROAD
Author: Pay Conroy
Publisher: Nan A. Talese
Published: August 2009
Pages: 544
Posted by Lisa (Southern Girl Reads) at 12:00 AM